The original “Star Wars” had instant cinematic appeal with fantastical creatures, space battles, charismatic characters and the grandeur of John Williams’ operatic score but in retrospective viewing, it’s full of cultural appropriation and subtle racism. I’ll admit, I too enjoyed the volley of romantic bickering between Han and Leia, the humor of R2D2 the sassy, beeping trashcan and Chewbacca the space Sasquatch. I sank into the pop music-like easiness of the movie, but unlike my peers, I never became a hardcore fan, perhaps because I first saw it when I was older and less impressionable to it’s influence.

Look at countless “Star Wars” posters and you’ll see who the target audience is, white America, but the agelessly popular franchise is guilty of essentially cultural plagiarism. In the original trilogy, (starring Hamilton, Ford and Fisher) I don’t think there were any Asians in the film. The second trilogy (starring Portman and Christensen) had a minor female Asian Jedi character who was briefly shown being defeated (of course). Finally someone must have noticed the racial imbalance so three Asian characters were added to “Rogue One”. But all three characters seemed like an afterthought of belated inclusion. The Asian warrior, Chirrut (portrayed by Donnie Yen), was a likable character who was allowed to heroicly die but unfortunately his character was also blind, and was not an official Jedi. Really? That’s the best Asian hero that Hollywood could come up with? It seems like a racially motivated, conscious decision to me. Chirrut wasn’t permitted to outshine the white heroes of the franchise. He was a Jedi wanna be in the film but in real life, Yen is an expert martial artist and actor.

“The Last Jedi” also includes a rare female Asian character portrayed by newcomer, Kelly Marie Tran, but she is in a subordinate role, as a tomboy mechanic, Rose Tico. She’s once again Not a Jedi, and she has an odd, anime-like, overly-wispy, unflattering hairstyle. She’s wearing frumpy, loose fitting overalls and has a short, stocky to average woman’s body; she’s not glamorously attired or portrayed as a gorgeous sex symbol like the model-thin, Caucasian female heroines: Leia, Padme, Jin and Rey. A note about names, Padme is an Indian inspired name and Jin is a Korean inspired name, (I’ll explain the name, Han later). Rose is romantically paired with the ex-storm trooper, Finn. He’s her equal in the Star Wars universe because they’re both secondary, minority characters. Rey and Poe are the prominent Caucasian leaders and heroes that save the cosmos from evil. 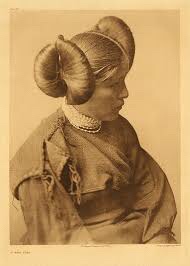 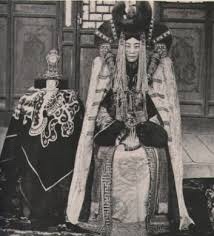 The costumes in “Star Wars” often resemble both elite and rural, traditional Asian ethnic clothing. The Jedi’s humble white, beige and brown earthy, layered robes look like variations of traditional Asian monk and peasant farmer clothes worn in ancient Korea, China and Japan. The most obvious examples of cultural theft are displayed in Darth Vader’s helmet and the zen-like simplicity of the light sabers. The flared, bell-like shape of Vader’s iconic helmet looks very much like a samurai’s head gear and the glowing sabers look like samurai swords held exactly in the same way. In the latest trilogy, the sabers are hilted in a T cross shape, a Christian crusader style, perhaps to connect a new audience with a European reference? If Lucas had just stayed with a Celtic/Druidic visual thematic, I would not be writing this article but he greedily took the best of Asian spirituality and art without a hint of acknowledgement or thank you. Like Christopher Columbus, Lucas thought he discovered Asian mysticism and white, suburbanite Americans bought into that illusion for decades.

Darth Vader’s mask was dark, ominous, mysterious, annihilating, like a phantom, a bringer of death. Which reminds me of the Japanese kamikaze pilots who were suicide bombers, Lucas’ fascination with WWII American dogfighting pilots and heroes are often represented in his films. The Evil Empire in “Star Wars” was fascist, modeled after the German and Japanese imperialists. The uniforms and militaristic formations were obviously reminiscent of nazi clothing and propaganda parades. The storm troopers were identical clones, which symbolically echoed the enforcement of conformity and racial purity/eugenics that was prevalent in both the German and Japanese agenda of the enslavement and genocide of foreigners.

“Raiders of the Lost Ark” was originally a Lucas project that Spielberg took over. It featured Harrison Ford as Indiana Jones, a parallel version of the Han Solo character, still fighting the German nazis during WWII. Interestingly, ancient Korean people called themselves the Han people, Han is an authentic Korean name. But sadly the Asian characters in those films followed bigoted stereotypes. Remember Short Round, the orphaned boy sidekick and how can anyone forget the elaborate ridiculousness of a royal Indian inedible feast of writhing insects, live monkey brains and ritual open heart sacrifices in “Raiders of the Lost Ark, Temple of Doom”. Yes, again the romantic chemistry between Ford and Capshaw and humorous dialogue distracted us from focusing on the racial xenophobia that we as an audience were supposed to unquestionably ingest. I watched this film as a child, I’m embarrassed to admit that I found it highly entertaining. But now as an adult, I’m amazed that the racism in the film was never questioned.

Some people might say, “It’s entertainment, it’s not meant to be taken seriously” so the stereotypes are automatically less powerful? In actuality the subliminal, subtle, racist message is often the most influential. When we normalize stereotypes, we create social propaganda that encourages hierarchies and discrimination. Think of the message behind racist jokes, dumb blonde jokes, asian jokes… but it’s just humor right? Wrong. The message is making fun of a group based on their appearance or social class, it’s fueled by anger not humor.

The key concept of “Star Wars” is from Asian Taoist and Buddhist philosophy. Taoists revere nature and seek to understand and balance forces of positive and negative within themselves through meditation and martial arts. What Taoists refer to as “Chi”, “Star Wars” calls “the Force”. That’s why it’s alarmingly ironic that there are hardly any Asians in almost all “Star Wars” movies. George Lucas stole his best philosophical concepts from Asian culture but hypocritically won’t let them be the main heroes, if they are included at all, they are consistently in subordinate, “supportive”, sidekick roles.

Why does Yoda, the ultimate Jedi teacher, speak broken English with an Asian-like accent? Wonder that, I do. It’s as if Lucas watched a series of badly dubbed martial arts movies from the 60’s, including the awful “Kung Fu” tv series starring David Carradine, (a white actor portraying a half-Chinese character=yellow face). Both “Star Wars” and “Kung Fu” represent cultural theft. Cultural appropriation is claiming artistic authority of a culture’s traditions with no authentic connection. Colonialist’s profit from the “exotic”, repackaging ancient heritage as new, original and avant garde discovery.

“Star Wars” please stop pretending that you are an authority on martial arts or mystical spiritual philosophy. Stop white-washing Asian culture. “Star Wars” give credit where it is due. George Lucas is portrayed as a brilliant inventor but he’s actually an expert borrower and masterful imitator and because he doesn’t acknowledge the source of his inspiration; he’s a cultural thief. Subtly villianizing Asians under the harmless guise of science fiction is xenophobic. The time for real heroes to replace false ones, is long past overdue. Shame on you George Lucas.